Weapons are a big and important part of Elite:Dangerous universe even if you are not a fighter. In future we can expect some procedural generated weapons and more variations of huge weapons.

FIXED – guns never move and shoot only to fixed location, lasers will have small triangle and projectile weapons – small circle as target. Fixed energy weapons have small aiming assistence. Also keep in mind that left laser will shoot right triangle and right cannon left circle as shown in image below.

Gimballed – will track your target between those brackets automatically. It still takes split second for the guns to move to right position before firing.

In the case of small pulse lasers the gimballed version is actually about 20% worse in terms of damage per second.

For Multi-Cannons it's 25% but the Damage Per Second is for the fixed version is higher than the pulse laser to begin with.

Turrets – automated guns that fire depending on settings that you have under Right User Interface Panel>>Functions. Turrets are not precise weapons and are mainly used on bigger ships.

- When the weapon is latched on it will keep firing (so long as the shot isn't blocked, target is in range/arc etc), no need for any buttons to be held down, just fired once for each new target. Other than this initial activation they function as before.

- You don't need to worry about fire buttons for Fire At Will turrets. Making them care about firegroups gives you the ability to turn them on and off in combat, but do need need to be manually fired.

- Turrets can now aim down up to 5 degrees from horizontal (from zero), it's not exactly the same as gimbals but does improve the issue (and can be changed).

- Fire at Will turrets will not attack someone that would cause a crime, ever. If you want to do that you'll need to use other modes/weapons.

THERMAL weapons or energy weapons drain power and increase your ship's heat level, you need to divert more pips to WEP to use them frequently. Also keep in mind that even without taking a shot they require energy from power plant and installing Rail Gun on smaller ships may cause your other modules (like Life Support) to fail just upon deploying your guns if you have your module priorities wrong..

Energy weapons are best agains shields and not so good against hull. Also when over heated they will stop firing and more pips to WEP will speed up this process.

There is no delay between gun firing and hitting enemy so there is no target's tracking needed. Rail Guns have delay between fire button press and actual gun discharge, also Rail Guns now have 31 ammo max so they are not suited for long fight.

Basic thermal weapon that comes with stock ship. Small and medium are pretty much useless but large is very effective. It's low heat weapon so you can fire pulse lasers longer than any other lasers. By damage done 4 Large pulse lasers are comparable to 3 Large Beam lasers.

Laser that fires in bursts (by three) so it's much more effective than pulse laser especially in small and medium hard points.

Fires high energy continuous beam and it's most powerful laser in the game. Will drain your WEP capacitor very fast but same time deals most damage. Because it fires continuous beam you can adjust your aim while firing. Has biggest armor penetration so you can use it effectively against modules.

Projectile – all types of Multi-Cannons and Cannons. Those guns need ammunition which is finite and can be replenished at every Station. Do not require as much energy as thermal weapons so you can have more pips in SYS or ENG, but they still need cooling, multi-cannons especially. Multi-Cannons are shooting many small projectiles that require time to travel between the gun and enemy ship, so in your HUD will appear moving target tracking/leading reticle. There are overcharged and high impact multi-cannons now, that have more damage per bullet but less clip size and fire rate per second.

Cannons are very powerful one shot guns that do huge damage to hull but are very very very slow now and smaller ships that are moving fast are almost impossible to hit.

Projectile weapons are better against hull than shields, but they still do good job at bringing shields down. The drawback is the ammunition requirement so you cannot shoot infinitely but need to replenish ammo at station. Ammo is cheap and usually it's more than enough for many fights.

Basic projectile weapon with high fire rate per second. Due to fast velocity of projectiles can be used from a greater distance than usual projectile weapons. Usually are used in combination with thermal weapon because damage done to shields are very small.

Shotgun cannon – fires 3 projectile rounds which scatter a little. It is most effective from point blank and useless from a greater range.

Projectile and thermal weapons at the same time

There now are two weapons which do a great deal of damage against shields as well as hull - Rail Gun and Plasma Accelerator. Rail Guns only have small and medium variant and only 31 round of ammo limiting their usage, while Plasma Accelerator has 105 rounds which are traveling at very slow velocity thus are ineffective against small and fast moving ships or from a distance, however, plasma accelerator has Huge variant.

High damage power hungry projectile weapon that generates a lot of heat and deals a lot of damage. One of top choices for PvP fights due to high damage against shields and hull, can be used effectively up to 2-2,5km.

High damage very low velocity projectile weapon that should be used only from very close range.

Railguns, missiles, cannons and torpedoes punch above their weight in terms of their effectiveness against larger ships. There is a stat missing from outfitting that is supposed to indicate roughly speaking what the weapons is good at shooting at in terms of rough ship size (small to huge). Under the hood is slightly more complicated but effectively every weapon has a number that is compared against another number on the target ship that if lower will result in lower damage than normal. If higher then it doesn't change. The largest hard point size on the ship is a good indicator to show what kind of weapons you need to be effective against it. So a cobra is best dealt with size 2/medium weapons.

There are heat seeking and dumbfire missiles and only defence against them now are Point Defence Turrets that are automated defence systems. The missiles do more damage to hull than shields. If enemy enters silent running mode missiles will fail to track it.

Advantages are that heat seeking missiles will search for their target and doesn't require much skill to fire, thus being viable defence strategy for big trade ships.

Disadvantage is high price and low total amount – too many enemies can drain your load very fast and leve defenseless.

Missiles usually are used more for defence, last resort – when you are close to dying, or when enemy shields are down and you want to finish them fast.

Releases mines that will detonate if enemy bumps into them or self-destruct one minute (Small) after being released. They appear as white contacts on your radar and currently do very little damage.

Dumbfire missiles that fly in straight line until hit something.

Heatseeking missiles that are guided by target's heat signature.

Guided torpedoes, no idea why they are in the game because pylons have very low ammo count and unimpressive damage.

Also it's clear that from 2,5km or more weapons are useless - they will deal 4x less damage, from 2km - less than a half.

Large vs Medium vs Small 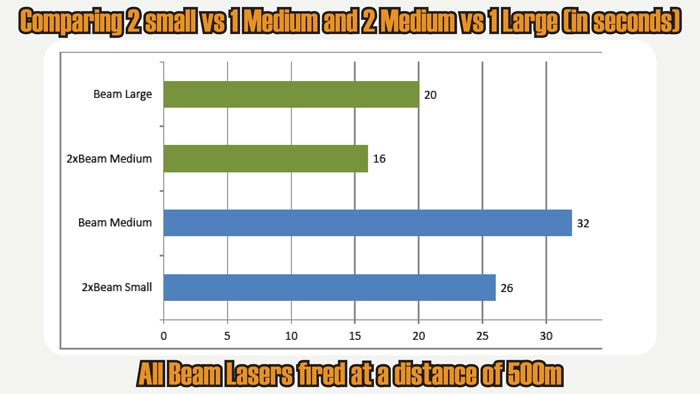