In 1.4 update we have new ships to play with. 2 Federal ships - Assault and Gunship and one Imperial - Eagle, so let's compare Imperial Eagle vs Eagle. Federal ships i will compare later.

Imperial Eagle is more expensive, faster, with better base shield and armor values, instead of 3 small hardpoints it has 1 medium and 2 small.

Jump range is similar for both ships, they both have same frame so same hull mass and hardpoint locations, same perfect visibility from cockpit.

Imperial Eagle has one class higher power plant, but with same class power coupling there is no real gain - if you use thermal weapons you will even drain WEP capacitors faster, if you go for kinetic weapons then you gain more, but same time you still need to get rid of enemy shields first anyway.

Maneuverability is the key

For any combat ship agility is the key to success - to break away from enemy firing arc or to keep yourself on enemies tail, but if you have to compensate slow pitching speed with more pips to ENG instead of pips to SYS or WEP then it's bad.

And Imperial Eagle pitching speed is abysmal - it pitches 360 degrees with 4 pips to ENG slower than Eagle with 0 pips to ENG, meaning that in the end Eagle will have stronger shields because of more pips to SYS.

If the look is all you need

If you are in for a visual treat then Imperial Eagle wins hands down - it looks cool, it is Imperial style ship so there are many similarities with Imperial Clipper - same white and blue cockpit and modules on the wings. Add improved engine sound and you have a beautiful ship to fly.

I think devs must tune up Imperial Eagles agility from 6 to 7, maybe even to 8 or add one class higher power coupling, anyway it needs some improvements because in current state (CQC 1.4 beta) it's not useful at all, sadly. 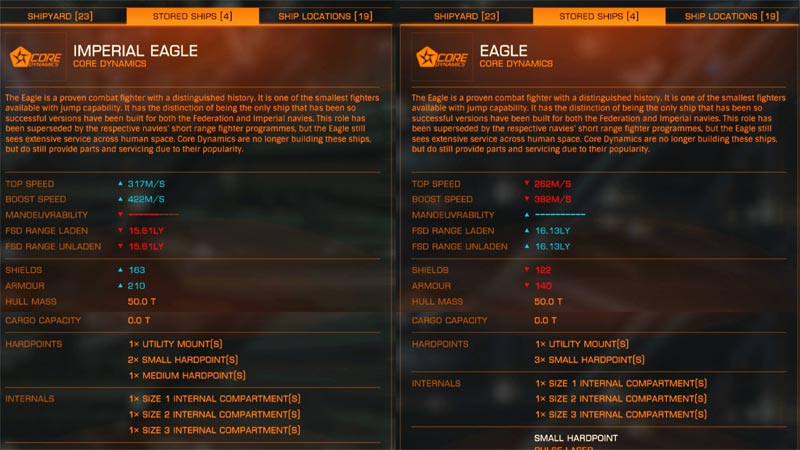 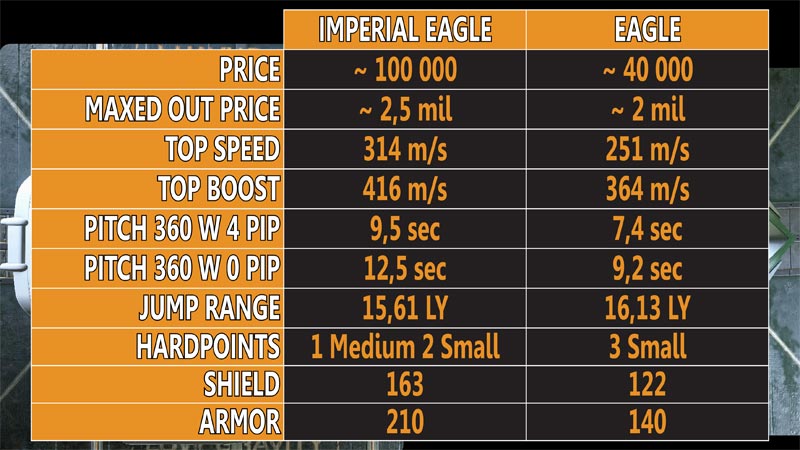