The difference of 40t is not enough to create a -25% difference in it's base shield strength. It's more like -2.5% with an average shield generator.

The exponent is set too high after investigation. I assumed as did some other designers that didn't set this up that it was linear. Evidently it wasn't and we've been discussing the reasons for it and whether it should be changed. The conclusion is to lower the exponent to make it more linear than it is now so there is some meaningful difference between all pips. The side effect of this would be that the default damage reduction at 2 pips will be higher than it currently is making all ships feel a bit tougher in general. But on the flip side lowering your pips will make you feel weaker too where as before it didn't really change anything.

The shield strength doesn't change at 0 pips or 4 pips. What has changed is how strong the shield is at the pip levels between them. I.e. 1, 2 and 3 pips will reduce damage slightly more (around 10-20%) than they currently do so as to flatten that curve above.

Shield mass rating is based on the Hull Mass. The anaconda is indeed 400t of hull before any modules are fitted and that is what the generator uses to determine shield strength. If that number could be lowered the strength would go up given the same generator but you can't do that. In future it might be possible to fit modules that can decrease the hull mass for the purposes of shield strength calculation (think shield boosters or something).

Shields are balanced in the only way that makes any sense that allows a single shield generator to fit on multiple ships of varying size.

Imagine the shield generator as having a finite resource that it uses to produce a shield. Spreading that resource other a larger area will result in a weaker shield at any single point. A smaller area would result in a stronger shield at any single point. With that scheme in place it makes sense to alter the strength of the shields based on some factor of size so that a puny sidewinder shield can't just provide an Anaconda with a reliable and strong shield when the anaconda is huge in comparison (it/s not fair and makes no sense). Thus a shield generator is optimised for a certain hull mass which is a convenient way of encoding size into the ship's stats. If the ship has a lower hull mass it's like your able to spread the shield energy over a smaller area so it gets stronger at any single point. Being over that size results in a thinner and weaker shield at any single point and going to0 big just results in a shield so thin it doesn't work.

The only other way of doing this would be to have bespoke shield generators for every single ships in the game and not something we're prepared to do.

If you're exactly at the optimised mass then you'd get a modifier of 1 so no change.

Sidewinders firing pulse lasers at an Anaconda for example get their damaged cut to 1/3 their normal damage potential. That might throw such a test in game because you don't know the exact numbers behind how weapons and ships compare to one another other than the vague notion that small weapons are weak against big ships.

If you want to ensure you're doing the max damage the weapon is capable of you need to use a huge weapon as that will always do it's best against any ship in the game.

It ensures that it's always better to fit the largest weapons you can if you want to fight equal or larger ships effectively rather than just loading up on as many small and cheap weapons as you possibly could. Now you have to choose between wanting to target smaller ships and taking smaller weapons that will fire faster and track quicker or fighting larger ships and dealing with weapons that fire slower but do appropriate damage.

With a Class 4 shield generator the Asp will be better off because it's base strength is high enough that even with the favourable modifier to the cobra (who has a lower hull mass than the optimal mass of the generator) it ends up with more shield strength.

We will be displaying actual shield values, just didn't make it in time for release.

A note on shields

Any strike on a shield will prevent regeneration for a few moments. They don't start to regenerate the moment they stop taking damage.

Using shield cells generates significant heat. There's a five second delay before they kick in. We think that this makes for some interesting decisions concerning how to manage your ship heat either side of the fence.

What we're really after, is feedback from folk who are trying various loadouts and combat tactics. Just jamming the fire button down is, for this beta, no longer always a safe option (it's still an option, of course, but it can have consequences).

Accept that ship heat is now a "thing" to worry about, and explore how this affects your tactics. 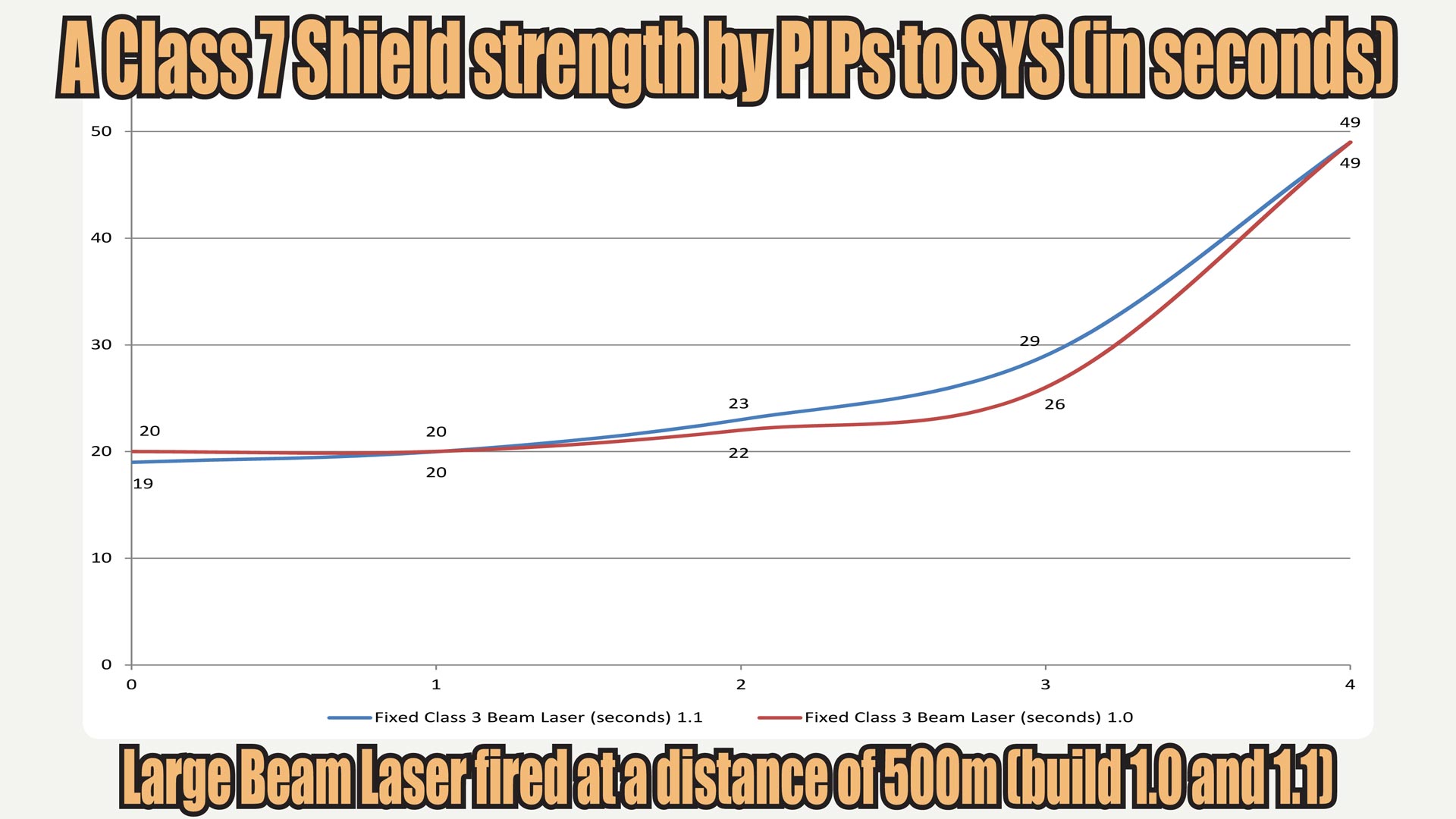 In build 1.1 there was very little difference between 0-2 pips and difference between 0 and 4 was 150% so with 4 pips to SYS you had 2,5x stronger shields, add to that 8 utility slots on Anaconda filled with A shield boosters and you have flying fortress.